Victor "Vic" Gigante is a corrupt high-rank detective in the New York Police Department who secretly works for the Genovese Crime Family against Justice Forever. In Kick-Ass 3, he forms his team as anti-heroes called "Skull and Bones" whom are, in fact, robbing gangs under guises of vigilantes, pushing the Superheroes-Cartel war further. Ultimately, he is the final vermin fought with Kick-Ass and Hit-Girl.

Vic Gigante is a detective in the NYPD, enlisted before the entire story timeline. As a senior detective and later, police captain, Vic held administrative power over his fellow officer Marcus Williams.

In reality, he is a corrupt cop secretly working for the Genovese Crime Family for long time and have become the de-facto leader over dozens of corrupted cops himself. Realizing his sinister nature, Marcus has been determined to brought him to justice, which put the two officers in conflict against each other.

Red Mist (now using the code name "The Motherfucker") has begun recruiting his own group of villains using social media and his father's wealth. Together, they launch a full-on assault upon the suburban neighborhood where Katie Deauxma (Kick-Ass's unrequited crush) lives. Nearly a hundred innocent children, police officers, and Katie's father are sadistically killed by The Motherfucker and his henchmen, who then take turns gang raping Katie.

The massacre leads the police (led by Detective Vic Gigante, who secretly works for The Motherfucker as a mob informant) to scapegoat the super-heroes for the deaths. All known heroes are rounded up and put into police custody, including the members of Justice Forever.

In Times Square, the Motherfucker starts his killing spree, only to be stopped by the army of heroes backing Kick-Ass. While Hit-Girl kills Motherfucker's bodyguard "Mother Russia", the police arrive to help the heroes. However, they are led by Gigante, who orders ALL masked combatants arrested, allowing Motherfucker to escape. Kick-Ass chases after him and after a rooftop fight, Motherfucker falls to the ground mortally wounded. Reluctantly, Kick-Ass summons help but gets accused of attempting to kill his rival. Hit-Girl spirits him away and the rescuers only see the young heroine, who is promptly blamed for the crime.

Once Kick-Ass is safe, Hit-Girl steals a police car in order to escape, but Gigante stands in the vehicle's path under the belief that Hit-Girl will never kill a cop. His hunch pays off and Hit-Girl swerves, crashing the vehicle and is arrested. When Marcus tries to come to her aid, he is also arrested by Gigante, when he is baited into revealing that he knew his step-daughter was the infamous Hit-Girl. Hit-Girl is then led away in cuffs, though the crowd of survivors cheers her on for her role in stopping the Motherfucker and his group.

In Kick Ass 3, Captain Gigante and three other cops don costumes and rob Rocco as the Skull & Bones Gang, with the intention of amassing a fortune and leaving New York before Rocco can take control of the East Coast. In response, Rocco orders the killing of everyone found in a mask, resulting in the deaths of Insect Man, The Juicer, and Dr. Gravity, and the kidnapping of Todd. Vic received a called about Hit-Girl planning to killed Rocco and loyal mafia bosses, he praised to rid himself of his mafia and the two lousy superheroes. He and fellow crooked cops hunt down Hit-Girl and kill her. He believes he's finally caught Hit-Girl outside of the Mafia's secret meeting operation, and thanks her of ridden him of his about the mafia bosses for him and now gloating he'll takeover the mafia operations after he kills this superhero. But she lured him and his cops to a trap. Underneath their feet and police cars are remote controlled grenades all over the ground covered in grass, she set it off and the crooked cops died or fatally injured from the explosion of the grenades and being crushed by the flipped over cop cars on their bodies. Vic is brutally injured when Hit-Girl punches him in the groin, shattering his entire pelvis and incapable of walking anymore as Hit-Girl's message to end his criminal lives. Few months later, his confessions of criminal activities he participated and rooted out the people who work along side with him were revealed to the public. Vic lost his position to Marcus and was sentenced to jail. He is promised by Hit-Girl, as long as he confessed to court everything he did as a crooked cop, she wouldn't kill him because she has a sense of pity.

As the most high-ranked and capable corrupt officer working for several cartels, Vic Gigante is as much as powerful and dangerous if not exceeded his benefitors. Having perfectly hid his traces from Marcus and other officers' eyes, Vic is careful and resourceful with his status while being cold and ruthless to be regarded as the brain amongst NYPD's dirty cops.

While not directly involved in cartel's operation himself, Vic has been alocated considerable wealth and rank for betraying Police department. The aboves are enough for him to gather, arm and found his own SaB to hunt down gangs for money while leading them himself.

Most importantly, Vic made sure his police status are well-put into his own gains, having jailed Hit-girl with his wits and effectively criminalized JF, Vic has brought himself to the best position in entire series. 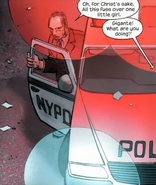 Vic as Skull and Bones leader