Mother Russia is a former bodyguard for Russian Prime Minister, Vladimir Putin. Chris Genovese hired her for protection from Hit-Girl and to kill Kick-Ass. She is a member of the Toxic Mega Cunts.

A former member of Spentsnaz and the KGB. She once worked for the Russian Prime Minister, until she flew into a drunken, blind rage due to her fellow bodyguards accusing her of cheating at a card game, leading to her slaughtering all of them.

Red Mist goes to Eastern Europe. He finds her on Twitter and merica. She and the Toxic Mega Cunts follow Red Mist to the Justice Forever's lair, and they destroy the heroes' headquarters.

Working for The Mother Fucker

At The Mother Fucker's lair, she and the gang relax at his new, retro villain lair. She suggests to lure out Kick-Ass by hurting the ones he holds dear. At Katie Deauxma's neighborhood, she and one of the gang members keep the police from stopping The Mother Fucker and his gang. She shoots many police officers and takes pride of her work. Mother Russia and the gang get ready to attack the streets.

She orders the Toxic Mega-Cunt minions to blow-up the buildings outside of the city, she and the other villains attack Time Square. Then, Mother Russia and the other villains are in shock and fear after seeing Kick-Ass, Hit-Girl and the Justice Forever have recruited more members to the battle. She battles Hit-Girl. She tells her that she sees her boss as an idiot for being afraid of Hit-Girl; however, she's gives him credit for paying her. She beating Hit-Girl badly, and is about to win and finish her off. Distracted by Battle Guy and Ass Kicker, Hit-Girl stabs her in the neck. Hit-Girl tells her that she shouldn't turn her back on her which lead to Mother Russia's demise. Her last words were "Mother Fuck--!" Hit-Girl removes her head, ending her life.

Mother Russia has been shown to be a fearless, tactical and intelligent character. When first hired, she was loyal and protective of her boss, but soon begins to recognise him for the coward he is. Evil and sadistic, she murders Colonel Stars, before cutting off his head. She will protect anyone for money, and kill anybody who stands in her way.

Pistol- in both the Comic and Movie versions, she has been seen using a pistol to kill either cops or members of Justice Forever.

Brass Knuckles - in the comic book, she is seen using brass knuckles in fights

Bowie Knife - In both versions, she is seen using an inscribed blade to kill and even cut off Col. Stars head in the movie. 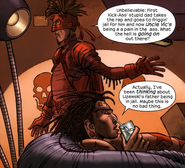