John Genovese is the head of a huge crime organization that is targeted by Big Daddy and Hit-Girl. Although it is said that both vigilantes followed inspiration from Kick-Ass, John hints that the two have been nagging him for a while, killing his people and busting his operations.

He is also a family man though, with a wife and a son. Genovese's son convinces him to fund his own superhero identity, Red Mist, designed to lure Kick-Ass, Hit-Girl and Big Daddy out of hiding. The plan works, and both Kick-Ass and Big Daddy are tortured. By this point, John knows that Kick-Ass is not to blame for Big Daddy or Hit-Girl's actions but since nobody knows who Big Daddy is, he wants to kill Kick-Ass as an example. Hit-Girl intervenes though, but not fast enough to save her father. She and Kick-Ass take on John and Red Mist. He almost kills Hit-Girl but intervention from Kick-Ass saves her. His genitals are shot off by Kick-Ass, distracting him so that Hit-Girl can kill him with a cleaver.

Guns, Swords, body guards and his own fists. 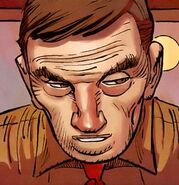