"Yeah, There's a dog on your balls!"
―Colonel Stars and Stripes[src]

Sal Bertolinni better known as Colonel Stars & Stripes was an ex mob enforcer for Frank D'Amico turned born again Christian and was also the leader and founder of Justice Forever.

He was only mentioned as "Sal" by Frank D'Amico's right-hand-man Big Joe, who found his phone, and he was thought to have been killed during an assault by the vigilante Kick-Ass, although unbeknownst to his fellow gang members at that time, it was Big Daddy who carried out the assault. However, he survived, and at some point after this, he decided to turn away from a life of crime, and he became a born again Christian.

Colonel Stars and Stripes was inspired by Kick-Ass's actions against the D'Amicos. He dons the persona of Colonel Stars and Stripes, adopts a dog named Eisenhower to aid in his endeavors, and founds the superhero group Justice Forever, training new members of the group, including Kick-Ass himself, in between superhero activities. After weeks of successful activity, including breaking up a large prostitution ring, he is tracked down by the Toxic Mega Cunts.

The Colonel is seen unfolding the Teams new logo onto the table before the Toxic Mega Cunts invade their hideout. The Mother Fucker recognises him as Sal Bertolini, and comments on the Colonel's past in his father's organisation; the Colonel simply says "I used to hang out with a lot of losers." To send a message to the other heroes, the Mother Fucker orders Mother Russia to cut off the Colonel's head. Colonel Stars and Stripes' final words are the choked defiant cry of "Justice Forever.." as Mother Russia traps his head in between her leg and then snaps his neck, ending his life before she decapitates his dead corpse.

After the Colonel's murder, a police massacre (of ten policemen) leads to a large-scale pursuit of masked vigilantes by the police. Villains and heroes alike were arrested without discrimination, forcing members of Justice Forever to go into hiding.

However, after Kick-Ass' father was murdered on the Mother Fucker's orders, Justice Forever rounded up every single costumed hero in the city to take down the Toxic Mega Cunts. Eisenhower fought by the side of Kick-Ass and Night-Bitch in the final showdown, the dog initiating it alongside Kick-Ass. The Remembering Tommy duo wielded the Colonel's signature stars-and-stripes bat in the battle to honor his sacrifice. Kick-Ass avenged the Colonel by defeating the Mother Fucker. After Justice Forever won the battle, they said that the Colonel would be proud of them.

He has knowledge in pressure points.

He also is skilled to take out three thugs simultaneously.

"Matthew Vaughn, Jeff Wadlow and I did a conference call with Jim a couple of weeks back and we've been itching to talk about this ever since because the energy Jim’s going to bring to Colonel Stars has me buzzing as much as Nic Cage with Big Daddy. Nic is really good friends with Jim Carrey and it’s well known to everyone that Jim loved the first movie, so we've been talking very informally about this for a little over two years now. We didn't quite know what Jim was going to be doing in the sequel, but the entire team loves him to bits and I’ve been a fan since I first saw him."

Colonel Stars and Stripes with Kick-Ass. 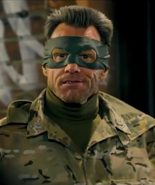 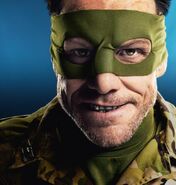