"It's time we had a little talk, Mister Kim"
―Colonel Stars[src]

Sal Bertolinni is an ex-mafia enforcer turned costumed vigilante called Colonel Stars. He was the leader of Justice Forever.

Sal started out as a soldier for the Genovese crime family, working alongside his brother Lieutenant Stripes. Then at some point, both brothers found religion and decided to repent for their crimes. Inspired by Kick-Ass, they formed the Justice Forever team and set out to clean up the city as superhero

As a born-again Christian, Sal didn't curse casually and despite his aggressive nature towards criminals, he was shown to be a very generous and inspirational person. He seems to be a genuine nice person making a difference. He later admits that although he has no problems letting his dog, Sofia, eat a criminal's genitals, the guns he carries are empty and are there purely for intimidation purposes. 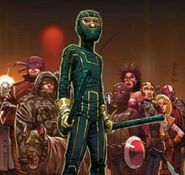 Kick-ass and the Colonel Stars