Marty Eisenberg is a friend of Dave Lizewski. He dresses up as Battle Guy and is a member of the Justice Forever team.

Marty has been best friends with Dave Lizewski since they were both seven. When Dave began wondering why nobody was actually getting out there and being superheroes, Marty mocked him at first, but then when Kick-Ass made his debut and costumed crime-fighters became common place, Marty was inspired and as a result, he became Battle Guy.

When Kick-Ass joined Justice Forever, he recognized Marty's voice and revealed that his origin story was false and that his parents were still alive. In spite of the lie, Battle Guy was accepted into Justice Forever and assisted in taking down a human trafficking organization. He quickly became Kick-Ass's direct partner in battling crime. Soon after, the two convinced their friend, Todd, to become a superhero as well.

After Chris led an attack on the neighborhood where Katie Deauxma lives, the police ordered the arrest of every costumed person in the neighborhood, whether they be hero or villain. Dave's father, unwilling to see his son arrested decided to turn himself in, claiming to be Kick-Ass, much to Dave's grief.

Marty allowed Dave to live at his house, only for Dave to discover that Chris had his father murdered in prison. Marty attended the funeral of Dave's father, but Dave was then kidnapped by Chris's goons; he was then rescued by Mindy Macready.

During the brawl at Times Square between the superheroes and the super-villains, both Todd and Marty unintentionally aided Hit-Girl in the killing of Mother Russia, a bodyguard of Chris. After the brawl, the police arrested every costumed vigilante on the spot. Dave, Todd, and Marty evaded the police in an alleyway and waited for Hit-Girl to show up, not knowing that she was arrested.

With Hit-Girl in custody, Dave receives a letter from Mindy and learns that he has inherited $2-million in cash along with all of Macready's "weaponry, vehicles, and crime-fighting equipment," along with instructions on how to break her out of jail. Six weeks later, he reassembles the remnants of Justice Forever and attempts to lead them in a cover operation to liberate Hit-Girl; the team is spotted outside the prison walls, however, and flees, leaving Mindy in the prison cell.

Six months later, Marty graduates from high school and goes off to Harvard University to study medicine for the next several years.

Marty has much of the same personality as fellow superhero and friend Todd Haynes. He's carefree, and exhibits extreme eagerness at becoming a superhero. Despite his courageous attitude, he has shown signs of cowardice. Marty is also very intelligent and went of to Harvard to study medicine after graduating high school. 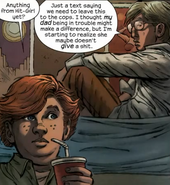