Todd Haynes is a friend of Dave Lizewski. Later on, he dresses up as Ass-Kicker and becomes a member of the Justice Forever team.

At first, Todd served as mostly nothing more than a side character. However, he, along with Marty, created a new curse word known as "tunk," which was said by three characters in the series upon its creation (Dave, Mindy Macready, and John Genovese).

Dave and Marty revealed themselves to be the superheroes Kick-Ass and Battle Guy, respectively, and told Todd of their superhero team known as Justice Forever. Todd joined the group, and donned an outfit which Marty described as "something you would wear when you promote same-sex marriage."

Dave remarked on how derivative Todd's superhero names were ("Kick-Ass Man," "Doctor Kick-Ass"), and the latter decided to settle with the name Ass-Kicker. Todd went on patrol with Justice Forever, but, because of an attack led by Chris Genovese, Dave's archenemy, the police ordered the arrest of any and every costumed individual on the streets.

Dave's father, who had discovered his son's secret identity prior to this event, claimed himself to be Kick-Ass and turned himself in, unwilling to see his son arrested. Unfortunately, Chris orchestrated the murder of Dave's father in prison. Todd attended the funeral of Dave's father, but the funeral was cut short by a sudden attack from Chris' cronies. Dave was kidnapped, but was rescued by Hit-Girl.

In the final battle of the story, he tried to hide, along with Marty, while the superheroes and super-villains fought each other. While trying to hide, they stumbled across villainess Mother Russia beating down heroine Hit-Girl (Mindy Macready's alter-ego).

Hit-Girl then killed Mother Russia, who was too distracted by the two to do anything. After the final battle, the police, who could not differentiate between the heroes and the villains, decided to arrest everyone. While the crowd cheered for the heroes, who were being arrested, Todd, Marty, and Dave escaped in an alleyway.

With Hit-Girl in custody, Dave receives a letter from Mindy and learns that he has inherited $2-million in cash along with all of McCready's "weaponry, vehicles, and crime-fighting equipment," along with instructions on how to break her out of jail. Six weeks later, he reassembles the remnants of Justice Forever and attempts to lead them in a covert operation to liberate Hit-Girl; the team is spotted outside the prison walls, however, and flees, leaving Mindy in the prison cell.

Six months later, Dave graduates from high school and moves into an apartment in Hoboken with Todd, and the two go to work part-time at both a fast food restaurant and a comic book store. Believing that he completely screwed up his personal life, Dave feels that all he has left is Kick-Ass.

While on patrol, Kick-Ass and Ass-Kicker investigated a series of burglaries that occurred in the area. Kick-Ass attempted to interrogate a group of people in a bar for information, but a man named Moscow revealed the burglar as Tay Weez and gave out his address just to get back at him for not paying the money he owed. Kick-Ass and Ass-Kicker then broke into Tay Weez's house and found him passed out drunk in his bedroom. They tied him up and called the cops to arrest him. At the Justice Forever headquarters, tensions were rising since no one has made an arrest in seven weeks. Kick-Ass and Ass-Kicker were really upset with the new superhero called The Juicer, who was treating the headquarters like it was his apartment.

Todd has much of the same personality as fellow superhero and friend Marty Eisenberg. He's carefree, and exhibits extreme eagerness at becoming a superhero. Despite his courageous attitude, he has shown signs of cowardice. 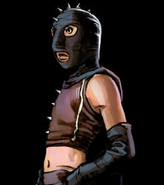 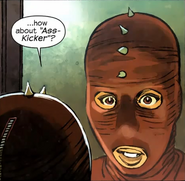